Points have not yet been decided.  Don't know if there are relics or not.
Posted by Mark Aubrey at 12:48 AM 9 comments:

The Commissioner wakes from his slumber

I take a nap for a week and lots of stuff happens.  Geesh!  You've been asking questions and I owe some answers.

Since only one contestant offered his thoughts I'll address them.  JediJeff is pretty much spot on for the first set.  All people that annoy me.

The second set?  Close.  John Sullivan?  One of the inspirations behind Gint-A-Cuffs.  The Iron Sheik?  The closest thing I can think of to old school wrestling.  By old school wrestling I refer back to the late 1960s and early 1970s when the television feed came from Montreal.  Tanner Foust?  One of the hosts of Top Gear on the History Channel.  Mostly I like Rutledge Wood, but he's not in this year's set.  Chuck Klosterman is an interesting pick for me.  When I saw his name I immediately stuck him with the first group.  Last year, blogger Kari Wagner-Peck wrote a letter to Mr. Klosterman, calling him out on his choice of words in some of his writings.  In an act of redemption, Mr. Klosterman addressed the issue and made amends.  There's all sorts of posters (you kids call them memes) out there that say something to the effect of: "It is how you react to your mistakes that shape you."  His response is what put him in the second group.

There.  That's your peek into the Commissioner's thought process.  Now on to the questions.

I'm going to paraphrase some of the questions as a few of them came directly to my inbox.

Q: Stadiums of  Yore?  Points?  No Points?
A: No points.  They aren't players, they aren't part of the team.  Yankees Stadium does not get dinged.  Just the +2 points for being an insert.

Q: Is it too late to join Gint-A-Cuffs?
A: Yes, at this point it is.  To add another favorite player to the mix would mess up the scoring.  Next year I'll explicitly state in the rules that the participant field will be closed on the day that the rules become official.  Sorry, Caitlin.  Yes, I emailed her, but not until today.  I'm a slacker.

Q: What are the points for a full sized autograph card?  I got one in another box and I'm asking just in case it shows up else where.
A: Fair question.  Look, I'm having trouble assigning the points for a parallel pack of mini reds.  If a specific card shows up in Gint-A-Cuffs that has not yet been addressed, then I'll deal with it.  I can't deal with "what ifs" right now.

Q: Has the prize arrived?
A: Yes, Topps sent it out quickly and it is hiding in deep storage awaiting the address of the eventual winner.

Q: Shouldn't you be answering our questions in a more timely manner?
A: Yes.

Q: So, what about that parallel pack of red backed minis numbered to 33?  How many points?
A: The research department is still looking into this.  The trouble is finding a balance so as not to tip the whole contest, but to still be fair.  Research, research, bribes, and research.

Thanks for playing, kids.
Posted by Mark Aubrey at 12:10 AM 4 comments:

The prize is in the mail

I just received word from Topps, the official Gint-A-Cuffs sponsor, that the prize that they are providing has been sent today.

A hobby box of 2014 Topps Allen & Ginter is on the way to east Tennessee.  It will sit in the cool of my bedroom closet until the end of September when I'll ship it out to the winner.  Or the participant that bribes the best.  Do your work, guys.  It has been quiet for too long.

So, a big thanks goes to the good folks at Topps.
Posted by Mark Aubrey at 1:00 PM 2 comments:

Just to have some fun (read: no extra points to be awarded), would anyone like to guess the reasons behind why I chose them?
Posted by Mark Aubrey at 11:31 AM 4 comments:

And the Commissioner tries to answer...


I am guessing the -1, but let me ask: What about the Field of Yore Yankee Stadium card?


Ah, JJ, don't guess with Gint-A-Cuffs.  A good guess, but just don't.  The Fields of Yore Yankee Stadium is immune to the effects of actually being a Yankee player.  Many historic events happened there and shall not defame it with a point ding.  Official Ruling: Only cards with a Yankee Player (or players) shall suffer a -1, not the Fields of Yore cards.  The card is worth +2.


My box-topper was a five-card mini-pack with red-bordered minis, each numbered /33. What are the point values for these?


Hmm.  Good question.  I had to do a bit of research and found that these are mini parallel packs.  They are a 'case' hit.  Just one pack per case of Topps 2014 Allen & Ginter.  I don't have a solid answer right now, but I'm working on it.  Some guys. Yikes.


I've included one of the card scans that Matt provided to aid my research. 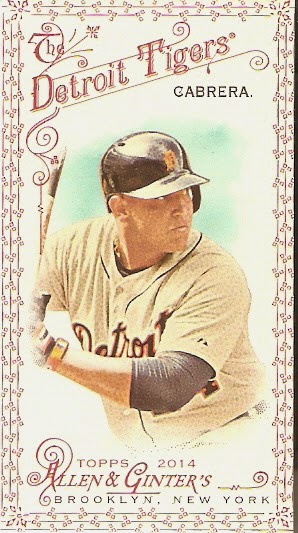 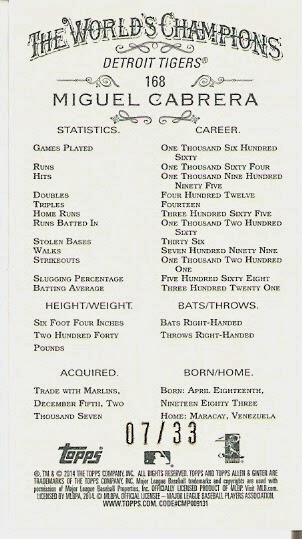