Ginter is coming.  That means it is time for the eighth installment of Gint-A-Cuffs.

Since just after the first of the year hobby sites have been sharing the press releases and info about Topps' 2016 Allen & Ginter product.

Let's see what Topps says.  Unfortunately they led their story with an image of  Maria Sharapova's signed card.  In March of  2016, Sharapova revealed she had failed a drug test at the 2016 Australian Open, admitting to testing positive for meldonium, a substance banned by the World Anti-Doping Agency at the start of 2016. On June 8, 2016, she was suspended from playing tennis for two years by the International Tennis Federatio.  Oops. 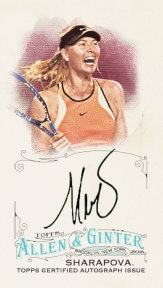 Sports Collector's Daily previews the set a bit more, including some of the mini inserts:

Kevin Costner has signed some cards, depicting him as Ray Kinsella from Field of Dreams. I can't tell from his signature if he signed it as Kevin or Ray.

So, what about Gint-A-Cuffs VIII?  Heck, yes, we're doing it.

The product is supposed to hit the street on July 20, 2016.  If that date holds true then I'll probably have the competition begin on August 1, 2016, running through the end of September.  Dates may vary.