I finally worked my way through the fog and and have assembled and posted the 2015 Rules. 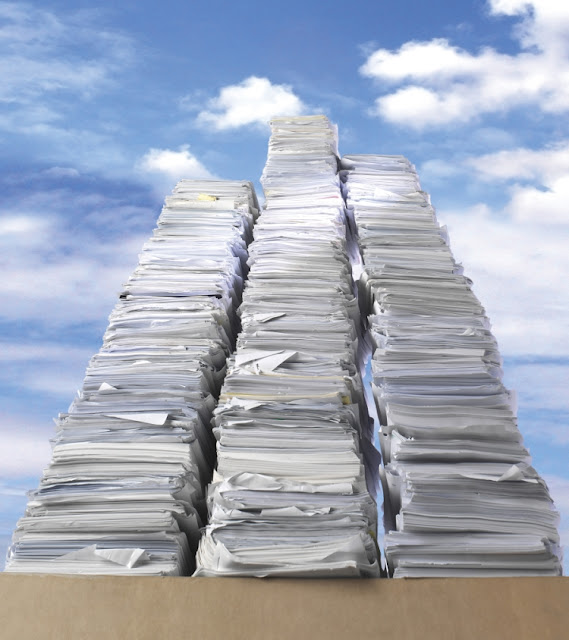 I'm sure I've left something out, or have an absurd typo that give a common card a bazillion points.  We'll work through it.

Have fun.  If you have questions, please ask on the Q&A Page.  I'll answer them in a semi-timely manner.

The Prizes Have Arrived 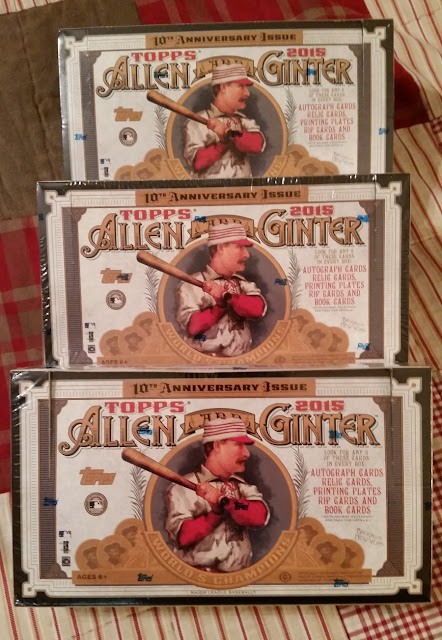 Once again, the good people at Topps have come through in support of Gint-A-Cuffs.  Three, count them, three hobby boxes as prizes.  We know that the winner of GAC-VII will be walking away with a box.  What about the other two?

And let's have another round of applause for The Amazing Spankee, creator of banners.

Yes, I have been working on the scoring.  It will be revealed in time.  Fear not.
Posted by Mark Aubrey at 9:04 PM 2 comments: 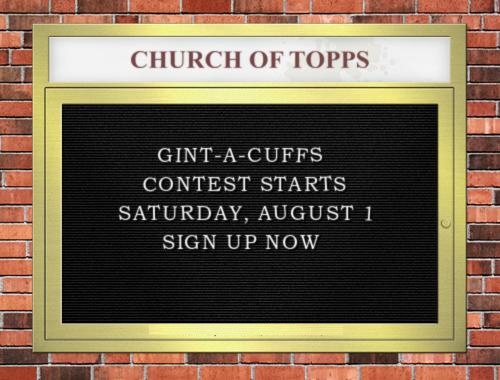 ARPSmith, of the ARPSmith's Sportscard Obsession blog, provided a shot of a wrapper.  Thanks.  He also provided his FP/FT and asked to be included in Gint-A-Cuffs.  Welcome, ARPSmith.

What are the odds that I'll actually cobble some scoring rules together by this weekend?
Posted by Mark Aubrey at 1:29 PM 4 comments:

A&G Has Hit The Streets

And the crowds are going wild.  Here at Gint-A-Cuffs we've had a much more laid back reaction.

Tweaking the scoring for the new contest.  Syncing with Topps on prize delivery.  Asking participants to provide their Favorite Player / Favorite Team.  Things like that.

So, if you still want to play, join in.  Leave a comment to commit to playing.  You can join until the end of July.

The contest will actually start on August 1 and will complete at the end of September.

Here's where I ask for help.  If you've already busted open some packs from a hobby box, please send me a high resolution scan or photo of the back of the pack.  I'm looking for the official odds.

It has been about two weeks since the last post.  Things are starting to come together.  Topps, our prize benefactor, has released a checklist for the 2015 Allen & Ginter set.  Ryan, of Cardboard Connection site, has a put up the checklist.  At this time, that's the checklist I'm using for assembling the 2015 GAC Rules.

While doing some updating here I found that I overlooked P-town Tom in his request to be part of GAC.  Sorry, P-town Tom.  I've since added you.

Now some of you were very eager to select your Favorite Player and Favorite Team.  I've accepted those that have listed them.  I just thought it might be wise for you to make sure that your FP was actually part of the set.

P-town Tom also asked in his comment: Why is it called Gint-A-Cuffs anyways?

The short answer is: I don't know.  When Beardy created this monster some time back, that's what he called it.  The thought is that the contestants would be sparring against each other.  Sort of like fisticuffs.

Here's a newspaper article from 1920 that uses the word, although it has been in use since 1605.


If you look at the old banners for this blog, you'll see a similarity.  There you go and Bob's your uncle.

You're all itching to start, I know.  The scheduled release date is Wednesday, July 22, 2015.  Participants are required to provide their own hobby box of the product.

The festivities will start on Saturday, August 1.  That gives a bit of time for us to actually know what is in the product.  You know how Topps loves to surprise us.

The contest will run until mid to late September.  I'll figure and post an actual date in the official rules.

There's probably more that I should say, but I need to spend time cleaning out a room for the bribes that will be pouring into my house.
Posted by Mark Aubrey at 11:27 AM 7 comments: